TEMPO.CO, Jakarta - President Joko Widodo delivered an award to literateur Putu Wijaya in the 2018 Indonesian Cultural Congress (KKI) which was closed on Sunday, December 9. Jokowi assessed that Putu Wijaya dedicated his life to literature and culture over a long time.

From his teenage years until now, Putu Wijaya is so active in presenting many works including dozens of novels and drama scripts, thousands of essays, and other works. "I am honored to present a Cultural Award to Putu Wijaya who comes in a wheelchair," Jokowi wrote in his Instagram account, Monday, December 10.

Jokowi expressed his gratitude to the leaders who have worked and dedicated their lives to keep the root of Indonesian culture firm and at the same time flourishing in the country. 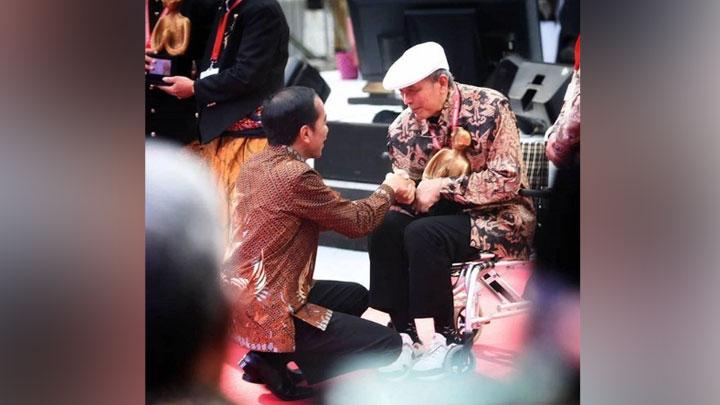 Other than Putu Wijaya, Jokowi also gave awards to three cultural figures namely Ismojono, Hubertus Sadirin who were members of the restoration team of Borobudur Temple in 1973-1983, and D. Zawawi Imron who was poet, preacher who continued to spread literary and religious virtues throughout Indonesia.

"This Indonesian Culture Congress has truly become a creativity place about how Indonesia is moving forward," said Zawawi Imron on behalf of artists and culturalists at the closing session, based on a release received by Tempo.

At the same occasion, President Jokowi conveyed that Indonesia has its own distinctiveness compared to other nations that are rooted in culture. According to him, rooted in Indonesian culture is a necessity, as well as thriving to face other cultures in the world.

At present, intense traffic and cultural interactions in this development era of transportation and information technology might create a high potential for conflict. And at the same time, Jokowi opined, it would create opportunities to openly expand tolerance.

Two groups that consist of pro-Jokowi government and ones that
opposed the government staged rallies at the same time.

As many as 1,091 Mount Rinjani hikers that were trapped when
6.4 magnitude earthquake struck Lombok, NTB, had been
successfully evacuated.

State Personnel Agency (BKN) said that the official website to
register for civil servants candidate (http://sscn.bkn.go.id)
would be open today.

GKR Hemas accused the Indonesia`s tradition and culture is
being threatened by the group`s actions.

The registration of 2018 civil servants recruitment (CPNS)
would begin on September 26 through a website sscn.bkn.go.id.

Jakarta Wants MRT to Acquire KCI as Instructed by Jokowi

Jakarta Eyes to Be Climate-Resilient City by 2030

Taiwan to End COVID-19 Quarantine for Arrivals, Welcome Back Tourists