TEMPO.CO, Papua - A Demonim aircraft, with 11 passengers and crew members aboard, skidded off the runway at Mulia Airport in the easternmost Indonesian province of Papua on Saturday after its left wheel got broken.

The aircraft, with flight number PK-HVL, skidded off the runway while landing at the airport at 12:30 WIT (East Indonesia Standard Time) on Saturday, Chief of the Puncak Jaya Police Resort, Adjunct Senior Commissioner Ari Purwanto stated.

"It is true that the plane plying between Jayapura and Mulia met with an accident while it was landing at Mulia Airport, as its left wheel was broken," he explained. 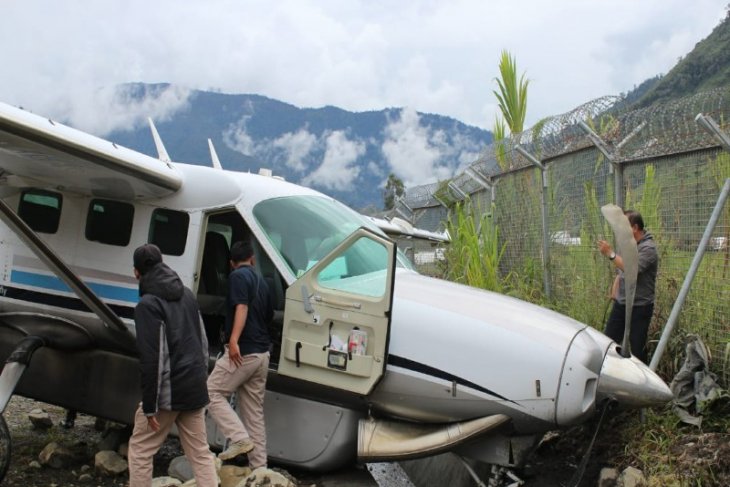 As a result, the pilot, identified as Jhonny ST, lost control of the aircraft, thereby resulting in the plane colliding with the airport's separating wall, he explained.

None of the passengers sustained injuries. However, they were in a state of shock and have been evacuated from the aircraft, he pointed out.

The wife and son of Papua Governor Lukas Enembe did not comply with the KPK summons regarding the corruption case of Lukas who's been named a suspect.

KPK doctors tasked to validate the illness suffered by Papua governor Lukas Enembe had difficulties in proving it.

KPK says it would investigate the allegations of money laundering at casinos by Papua Governor Lukas Enembe.

KPK accused Papua Governor Lukas Enembe who had been named a graft suspect of having accomplices in Singapore.

Papua Governor Lukas Enembe has yet to answer KPK's official summons over his corruption investigation.

Jakarta Floods Are Devastating - They Don't Have to Be

Deadly Football Match at Kanjuruhan; FIFA to Be Involved in Total Stadium Audit

Think City: Supporting the Vulnerable Communities of Jakarta Through Art