TEMPO.CO, Jakarta - The search efforts to locate the Indonesian Army's MI-17 helicopter which has gone missing in Papua Province since June 28, 2019 were resumed on Sunday by conducting a sweeping aerial operation above the area of Mimin Village, a military officer said.

The aerial operation was carried out by using a civilian chopper, Commander of the 1715 Yahukimo District Military Command Lt.Col.Eko Budi told Antara who contacted him from Jayapura, the capital of Papua Province, on Sunday.

Five soldiers joined the aerial operation. During the search mission, the civilian chopper swept the area of Mimin Village because it might be the location of the MI-17 crash, he said.

The Mimin Village area remains regarded by the residents of Pegunungan Bintang District as a sacred natural site, and the search and rescue ground team members did not sweep the area, he said.

"May those involving in the search operation be able to locate the missing chopper," he said.

Regarding this missing MI-17 helicopter, Army Chief of Staff Gen. Andika Perkasa had ever hinted that the search efforts would be continued.

"We are optimistic that all Indonesians will pray for the immediate finding of the missing helicopter," he told journalists after the inauguration of the military academy's graduates in Magelang, Central Java, in July last year.

On July 8, 2019, the search operation to trace the helicopter was conducted by the regional military command's personnel along with those from the National Search and Rescue Agency (SAR) and the Indonesian Defence Forces' Headquarters, he remarked. 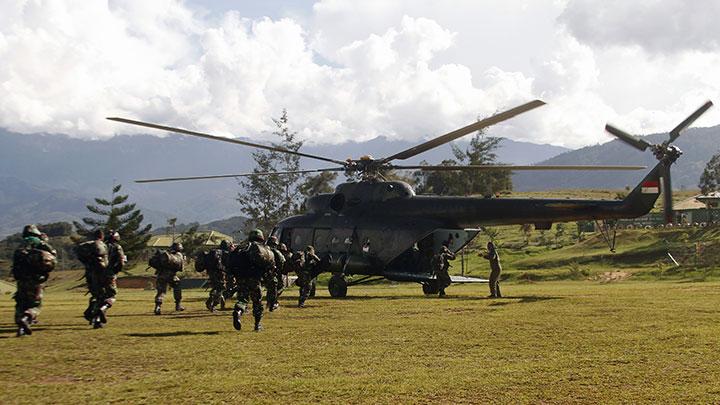 However, the SAR's efforts to locate the missing helicopter after taking off from Oksibil, Pegunungan Bintang District, on June 28 were hindered by factors including the erratic weather conditions and difficulties on ground due to inaccessibility to roads.

Since the day of its missing, search efforts to locate the helicopter have been steadily made by involving a Bell Helicopter 206 and Bell Helicopter 412 bearing registration number HA-5177.

The MI-17 helicopter, bearing registration number HA-5138, was carrying 12 passengers and crew members on board, who had earlier flown to Okbibab to deliver logistics to soldiers serving in the area.