Indonesia has Sunk 516 Vessels Since 2014 for Illegal Fishing

TEMPO.CO, Jakarta - Since 2014, the Maritime Affairs and Fisheries Ministry has sunk 516 vessels belonging to countries in its neighborhood and even from Indonesia for conducting illegal fishing operations in its waters. These vessels numbered 294 from Vietnam, 92 from the Philippines, 76 from Malaysia, and 23 from Thailand, in addition to two from Papua New Guinea, one each from China, Nigeria and Belize, and 26 from Indonesia.

In addition, from January to June 2019, the ministry has captured 67 illegal vessels consisting of 17 from Malaysia, 15 from Vietnam, three from the Philippines and 32 from Indonesia.

The ministry, in collaboration with the Task Force 115, the Attorney General's Office, and other relevant agencies has also eliminated as many as 28 illegal fishing vessels based on court decisions from January to June 2019. 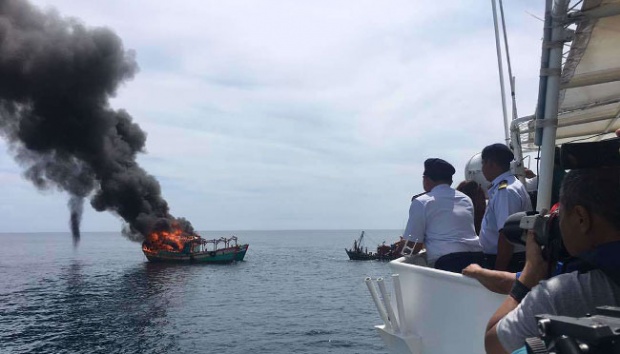 The figure consists of 23 vessels from Vietnam, three from Malaysia, and one each from the Philippines, and Indonesia. These and the ships that have been sunk between October 2014 and June 2019 bring the total to 516.

Earlier, the Indonesian Marine Bachelor Association (Iskindo) appreciated the agreement in the G20 Summit regarding Indonesia's initiative and leadership in combating IUU fishing.

"Although the agreement is non-binding, it will be the concern of the G20 countries in providing support for efforts to reduce the practice of IUU around the world," Iskindo's daily chairman Moh Abdi Suhufan said.

In the G20 forum which took place in Osaka Japan, on June 28 and 29, 2019, leaders of the G20 countries managed to agree on the commitment to tackle IUU fishing globally.

With such an agreement, the G20 countries would be compelled to take up the issue of IUU fishing within the framework of global cooperation.

"We appreciate the Indonesian government which in the past four years has consistently combated IUU fishing and has opened the eyes of the world on the mode, crime, impact and methods of eradicating IUU fishing through a legal approach," Suhufan emphasized.

The agreement is one of Indonesia's effort at the world level to invite other countries to protect fish resources, according to him.

Indonesia is one of the few countries in the world that has succeeded in increasing fish stocks after its crackdown on IUU fishing practices in its waters, he stressed.

Furthermore, Indonesia is considered necessary to oversee the commitment within international cooperation and program partnerships so the agreement of the heads of state can be followed up at the working level of cooperation.